Vancouver’s premier park bordering the downtown area was established in 1888 and has attracted residents and tourists ever since. When I first visited Stanley Park in 2010, we walked for hours through the park. There are many other ways to enjoy this 1000 acre park, including by car, bus, trolley, horse-drawn carriage and even by roller blades but this time, we rented bikes. There are several bike shops directly outside the entrance to the park and miles and miles of bike trails within the park to explore. We rented one-speed cruisers with helmets and a map from Spokes. Sheryl and I selected bikes with front baskets to hold our backpacks and we each had a bike lock for parking the bikes, but we didn’t use them. In retrospect, Jim thought we should have rented bikes with more speeds because he had a hard time with the old-style coaster brakes in place of hand brakes. When he tried to stop, all he accomplished was ringing the bell which happened quite often. Frankly, the wide comfy seat on the cruiser and the low price tag dictated my choice.

Sheryl and Jim with their cruisers in Stanley Park

Because our time was limited, we rode along the Seawall, the main route around the perimeter of the park, but we saw a lot in just a couple of hours. The Seawall is 8.8 km and then with the distance to and from Spokes, we probably rode about 11 km or almost 7 miles.  It was the perfect distance on a perfectly glorious day.

Our first stop at the First Nations totem poles is the most visited tourist attraction in all of British Columbia. Totem poles carved from red cedar trees are unique to the Pacific Northwest and a must-see on any trip to British Columbia or Alaska. They are not idols for worship, as once thought, but rather storyboards with recurring themes. The eagle represents the air, the whale represents the sea, the wolf stands for the land, and the frog links the land and the sea. 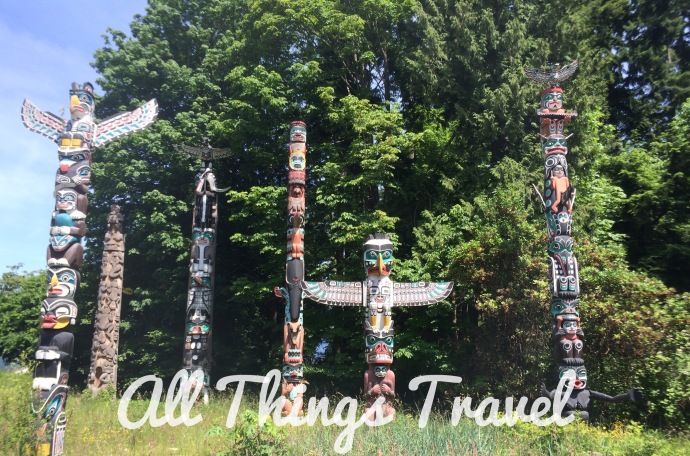 I love lighthouses and Brockton Point Lighthouse is a charmer. Built as a replacement in 1914 with an automatic light, it’s one of the well-known landmarks in the park. It’s small, almost dainty, but I’m sure the light does its job welcoming ships into the inlet and warning them where the land begins. 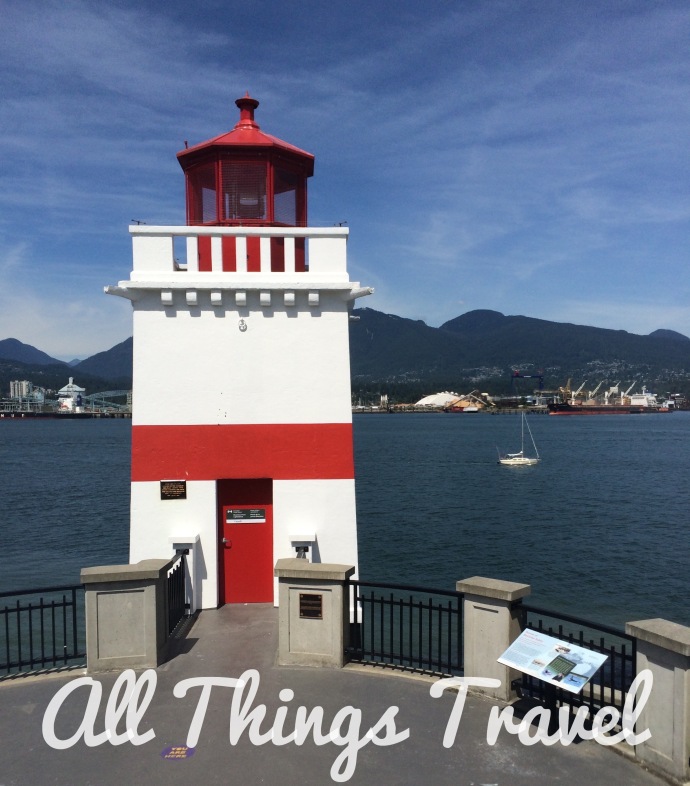 Our next stop was to get a photo of the inlet with a view of iconic Lion’s Gate Bridge in the background. This suspension bridge connects Vancouver to North Vancouver along a major artery through the city. 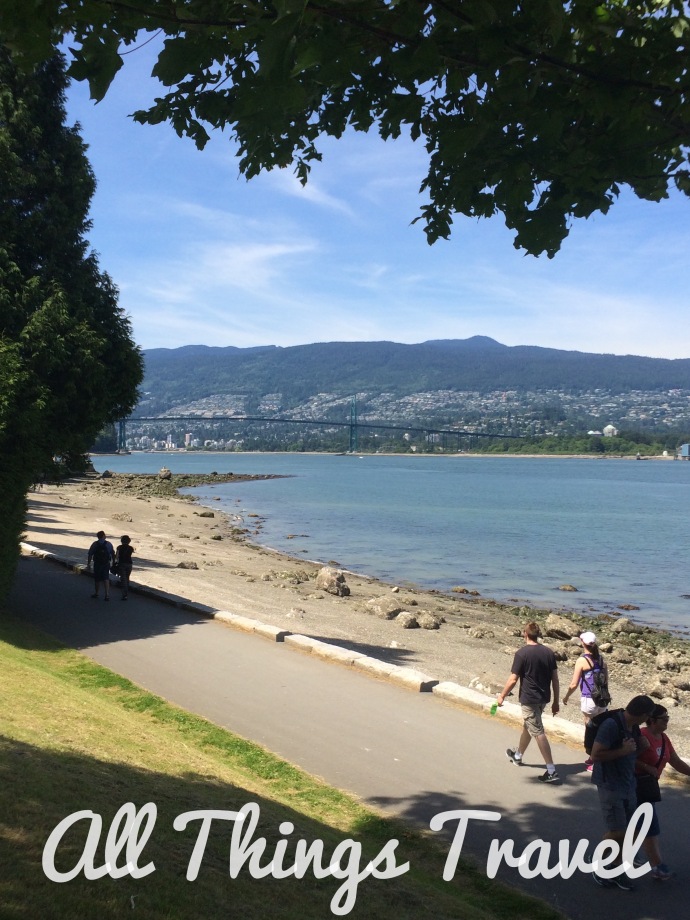 Nearby, the sculpture Girl in a Wetsuit perches on a rock. Designed to represent Vancouver’s dependence on the sea, she’s been sitting in the same spot since 1972 when the sculptor, Elek Imredy, gifted her to the city.

Statue of Girl in a Wetsuit in Stanley Park

The Empress of Japan Figurehead is a pleasant resting place with benches and great scenic views. The masthead graced the container ship RMS Empress of Japan until the ship was scrapped and the masthead was rescued, restored, and displayed in Stanley Park in 1927. This figurehead is actually a replica; the original is on display in the Vancouver Maritime Museum. 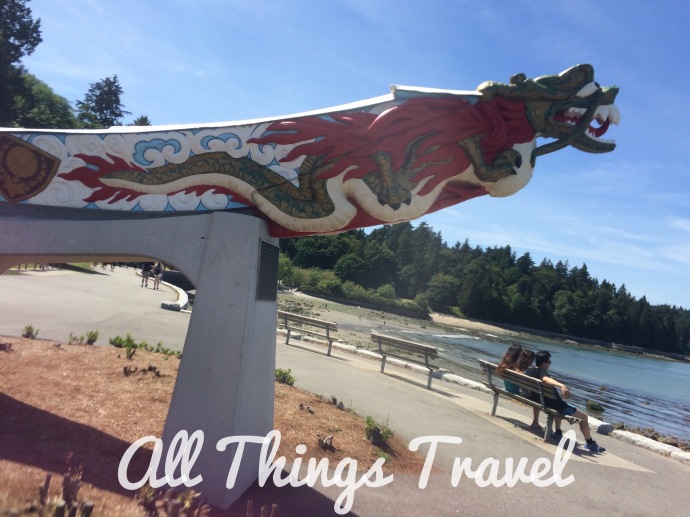 The day was warm with bright blue skies and every view was photo worthy. We stopped often for views and photos and while others joined us along the Seawall route, it was never uncomfortably crowded. 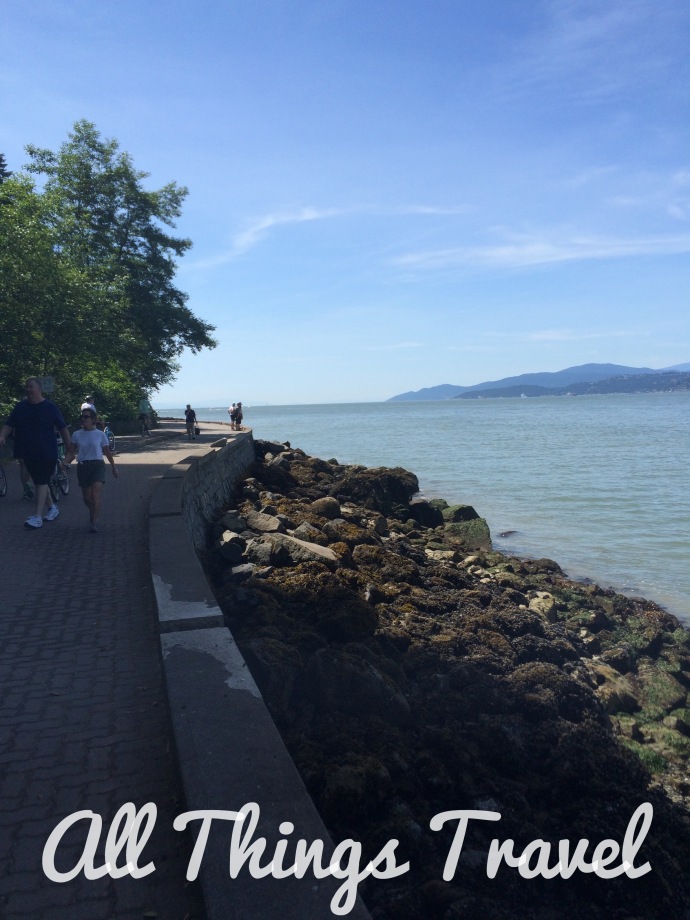 View from the Seawall, Stanley Park

We had been advised by our host at the B&B that on warm sunny days, everyone in Vancouver stops what they’re doing, strips off their clothes, and heads to the beach. Sure enough, the jumble of bikes and sunbathers at the Third Beach confirmed his warning.

When we spotted cairns built all over this rocky bit of shore, we couldn’t resist a photo. Since these cairns clearly weren’t here to mark a trail, I assume they are a bit of art created by passersby to announce “I was here, but I won’t permanently affect the environment.” 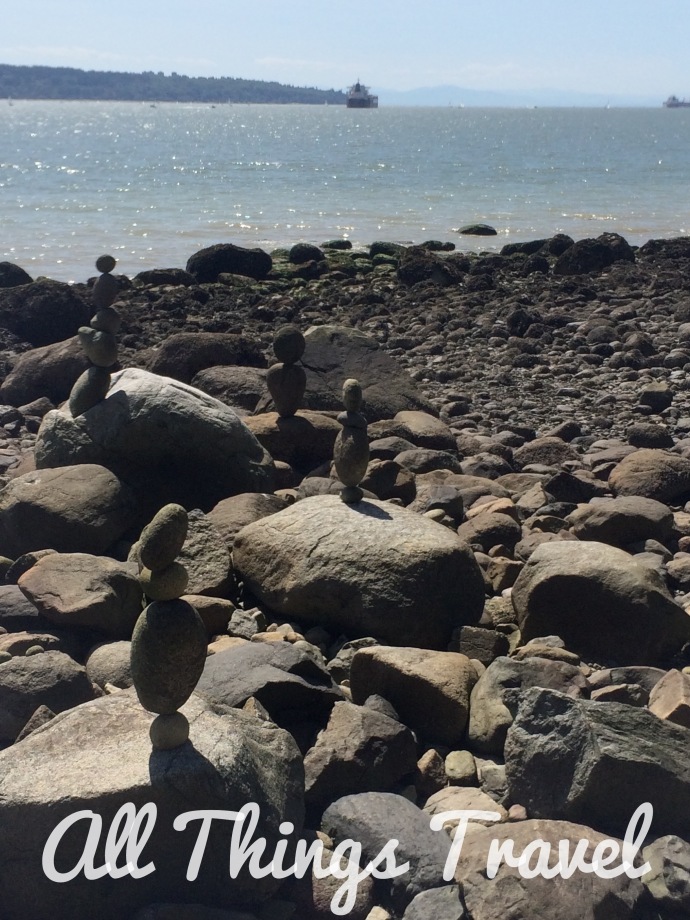 Cairns along the Seawall in Stanley Park

And further along the Seawall at Second Beach, there’s even a swimming pool.

There is so much more we didn’t have time to see or do in Stanley Park. The Vancouver Aquarium, located in the park, is Canada’s largest with over 70,000 creatures. Several restaurants located inside the park provide varied dining venues. Many more trails, lakes, and even a miniature railroad offer additional experiences to the visitor.

But what we enjoyed most were the scenic views all around us while riding on our cruisers. 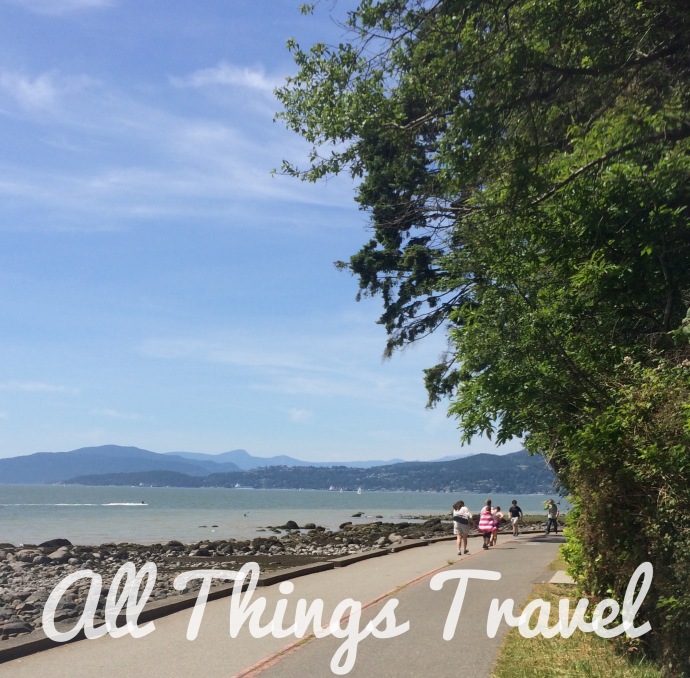 Pack a power strip for your next cruise. There was only one outlet in our room which was totally inadequate for all our technology. I found a small, cheap power strip for less than $5. Problem solved!
Loading Comments...
%d bloggers like this: