As we sat in the airport waiting to board our 2 pm flight on Thursday, February 7, 2019, in Des Moines, Iowa, our friend Rick remarked, “I feel like we’ve been traveling 24 hours and we haven’t even left yet.” Twenty-seven hours later, we arrived in Sydney, Australia at 9 am on Saturday. None of us slept well in our economy seats on the 14-hour flight from Los Angeles but honestly, I found it was easier than an 8-hour flight to Europe. It was long enough that we had to sleep at least a little.

After immigration (don’t forget to get your visa for Australia on-line before you go) and customs, we stopped at an ATM to get some Aussie dollars, then found a taxi to take us to our Airbnb in the historic neighborhood of The Rocks. With four of us, a taxi was less expensive than public transportation but when it’s just Jim and me, public transportation is usually cheaper for just two. We couldn’t check in until later in the afternoon but we’d arranged to leave our luggage at the townhouse while we explored the area. Celebrating the warm weather, we also managed to change into shorts before we set out.

Feeling jet-lagged after our long journey, we wanted to take it easy the first day and stay awake until a normal bedtime to reset our circadian rhythms to our new time zone. (Or at least, that was my plan.)

Research told me the first inhabitants of The Rocks were the indigenous Gadigal people of the Eora Nation who called the area Tallawodahla. The British established a penal colony in the 18th century and the convicts called the area The Rocks after the rocky sandstone they found. Historic buildings in The Rocks have been preserved or restored and today are occupied by restaurants and shops.  On Saturdays and Sundays, The Rocks Markets, where local artisans sell their products, operate from 10-5 so we wandered that direction to check it out.

On the map below, Windmill Street, where our condo was located, is circled in red and the area of the markets is the red marker. The Harbour Bridge and the Sydney Opera are underlined in red to show how convenient our location was to those attractions, too.

The Rocks, the oldest area of Sydney

We easily found the markets but when we spied a pub with outdoor seating, none of us could resist a brief respite. 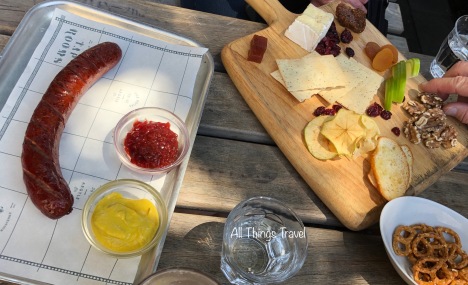 Pubs quickly became our choice for meals, offering good authentic Australian cuisine at a reasonable price.  I’d read about iconic Australian foods including Vegemite, meat pies, prawns (shrimp to us), barramundi, fish and chips, bbq, avocado toast, fairy bread, beetroot, and kangaroo, to name a few, and I was keen to taste most of them. I’ve had Vegemite before and I’m not a fan so I quickly scratched that from the list. Jim’s kangaroo sausage pictured above tasted like any sausage but it was a tasty snack.

Refreshed, we sauntered on to continue our first look at the neighborhood. 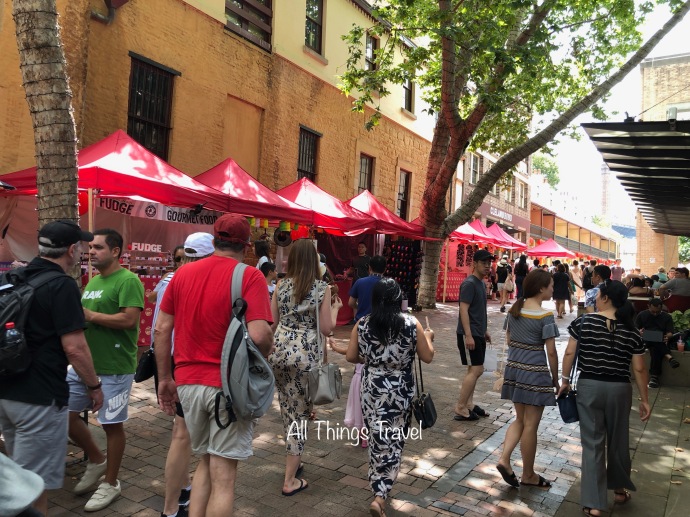 The Markets at the Rocks, Sydney

Fortunately, our arrival coincided with the Sydney Lunar Festival celebrating the Chinese New Year and the Year of the Pig. All the Chinese zodiac animals were represented by lunar lanterns located around Circular Quay but on our first walk-through, I got photos of the spiral pig and the snake. We also noted this convenient location was where we would board our cruise ship several days later. 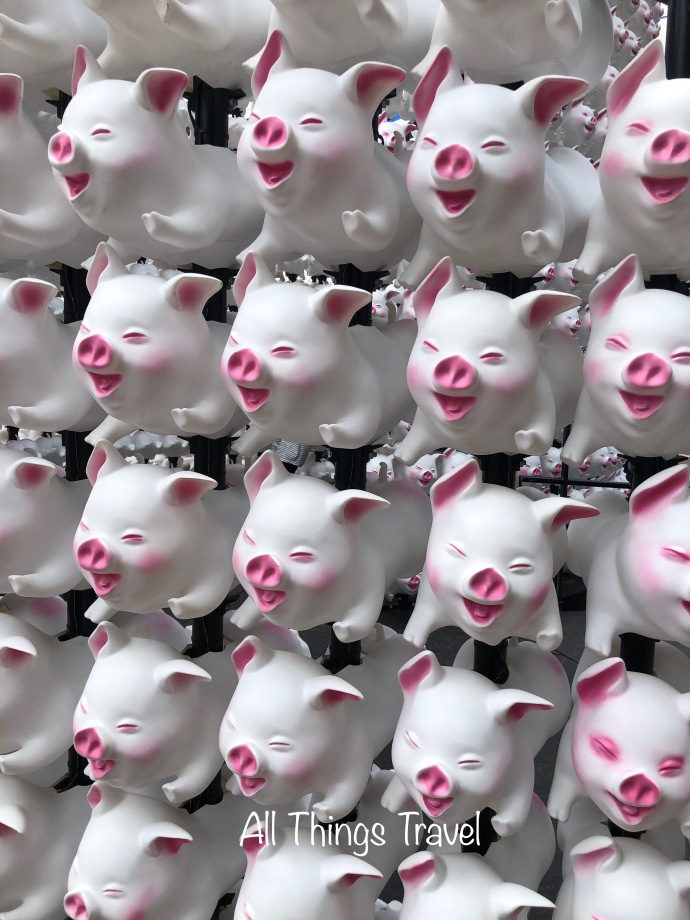 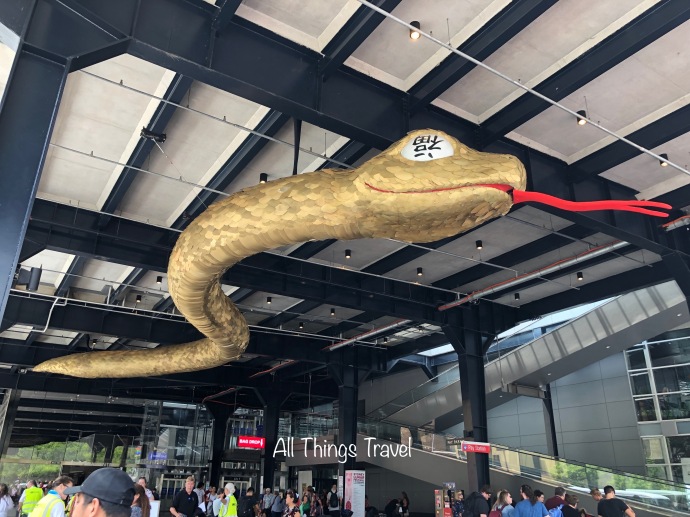 Although Jim and I were in Sydney two years previously, our first views of the iconic Sydney Harbour Bridge and the Sydney Opera House were just as captivating this time. 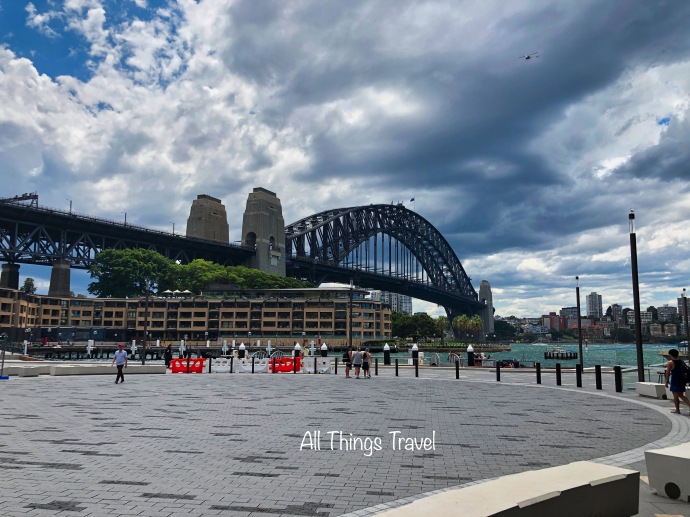 The ASN Warehouse, built of sandstone and brick, is another 19th-century building that brings history to life in the area. 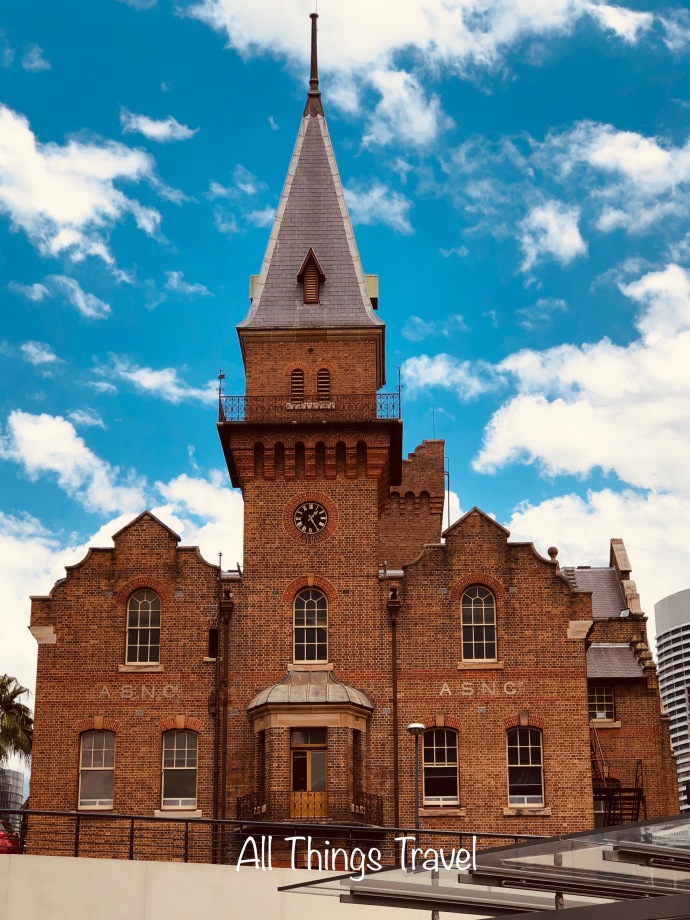 A replica of an Aboriginal pictograph showed recognition of and respect for the Aboriginal community. Many shops in the area sell authentic Aboriginal crafts such as the didgeridoo, a wind instrument created by termites hollowing out a eucalyptus branch. (In my imagination, I picture factories around Australia crawling with termites working hard to ready the eucalyptus.)

Didgeridoos sold in a local shop in The Rocks

By 3 pm, check-in time at our condo, we were all ready to return. After a little unpacking and settling in, the guys ended up succumbing to temptation and slept in spite of my warning.

Following their naps, we checked out my brother and sister-in-law’s favorite pub for dinner, The Hero of Waterloo.

Who would sit indoors with this weather?

The interior of every pub was quaint and historic

The sandwiches on the menu all came with chips which in Aussie English are french fries. What we call chips, they call crisps. Lesson learned. 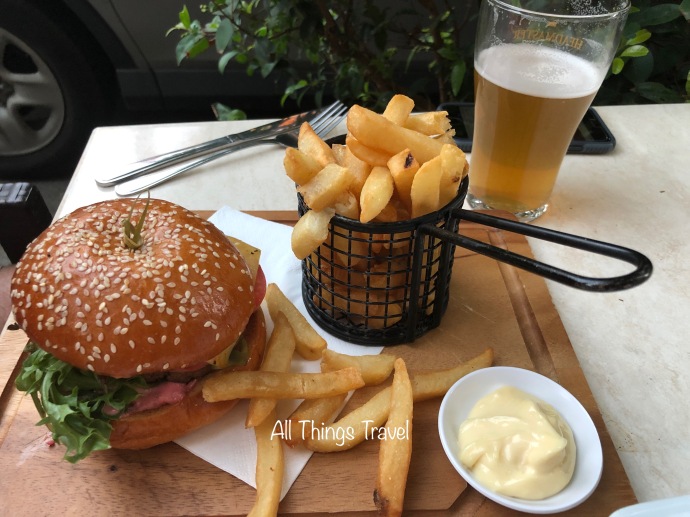 My sister-in-law recommended the potato wedges with chili and sour cream which I ordered and they were delicious. With Jim’s chips, however, we were heavy on potatoes.

But Rick’s Chilli Lime Prawns took the prize for the best meal of the night. I’m still drooling over them looking at the photo!

Chilli Prawns (their spelling, not mine)

Following a leisurely meal, Lori and I decided to walk to Cole’s, the nearest supermarket about 1 km away. After a few directional challenges in spite of Google maps on my iPhone, we found the spot on the map but saw no store and no signs. When we asked pedestrians in the area, they directed us through a building and down to a lower level. We never would have figured it out without help but throughout our holiday, we had the same experience several more times. Travel is so educational for these Iowa country bumpkins.

We planned to take the ferry to Manly Beach the next morning so it was early to bed but please come back and join us for another fun-filled day down under.

Based on events from February 2019.