Disappointed to learn Fort Henry, a UNESCO World Heritage site in Kingston, Ontario, closed for the season on September 3, we, nevertheless, walked around a bit and took a few photos on day 7 of our Great Lakes Road Trip. Built in the 1830’s atop Point Henry and overlooking the St. Lawrence River on a military route from Montreal to Ottawa,  the strategic value was readily apparent and the views were outstanding. 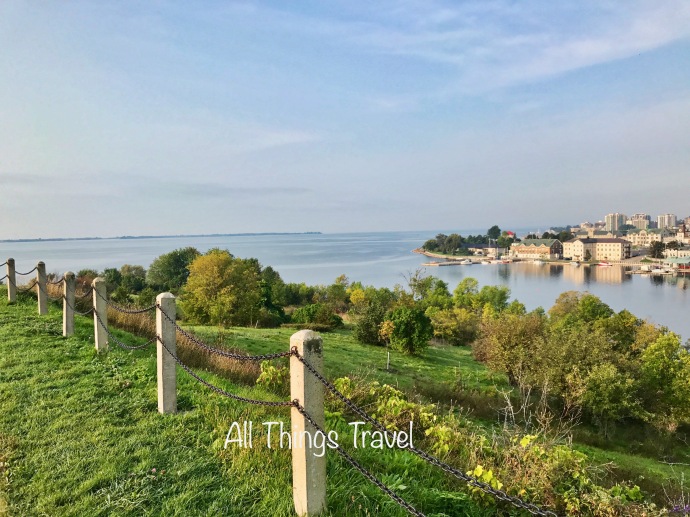 View from Ft. Henry toward Kingston 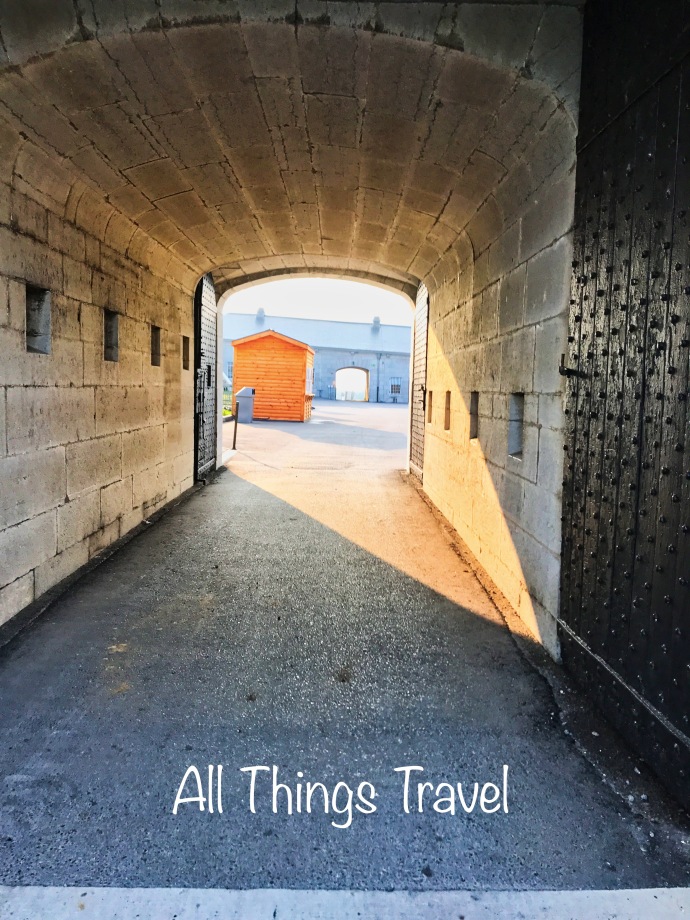 The gate at Ft. Henry at the upper fort 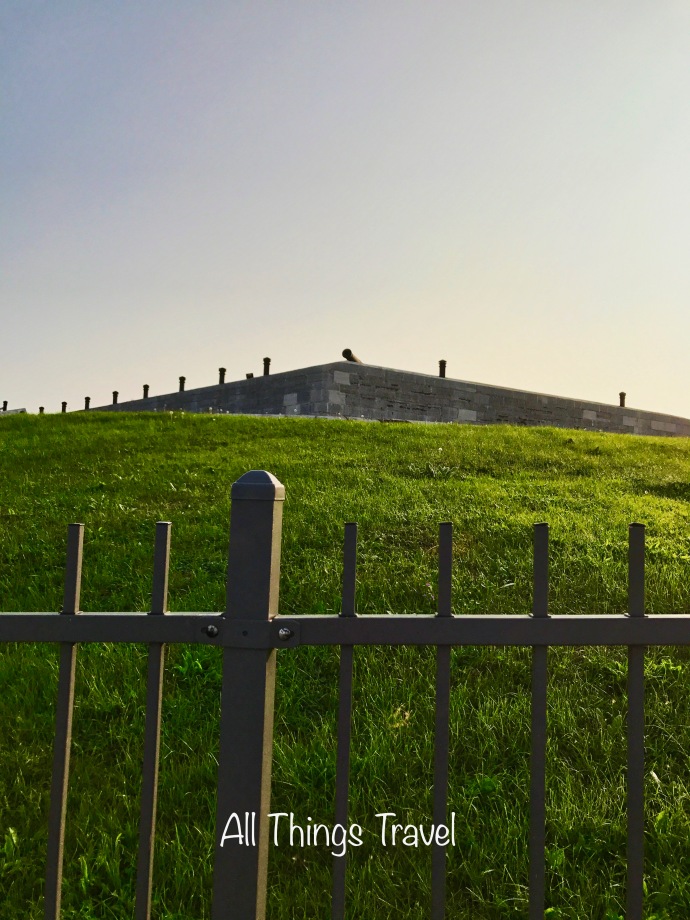 View of the lower fort 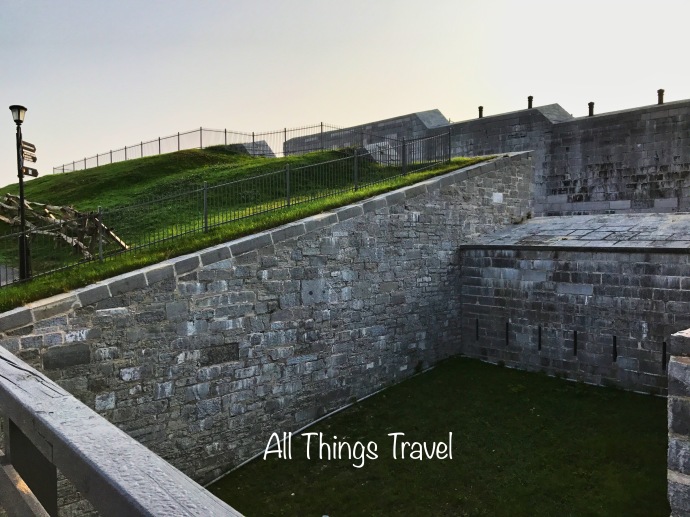 Kingston is the door to the 1000 Islands, a region located in the St. Lawrence River along the U.S./ Canada border. We drove 20 miles east to Ganonoque for a boat tour of the Thousand Islands with Gananoque Boat Line, billed as the largest and oldest of the cruise companies in the islands.  We decided on the 1-hour Beauty of the Islands cruise departing from Gananoque for $24.95 rather than the 5-hour Boldt Castle Stopover for $48.80.

Beauty of the Islands cruise route

The 1000 Islands are rich with history, beginning with First Nations people who inhabited the area before French explorer Jacques Cartier discovered the area in the 1500s followed by Samuel de Champlain in the 1600s. By the late 1800s, the area became the summer vacation destination for millionaires during the Gilded Age. George Boldt, the wealthy owner of the Waldorf Astoria Hotel in New York City, built Boldt Castle for his wife, Louise, who died before its completion without ever seeing it.

Incidentally, Thousand Island salad dressing was created here. One version of the story says George Boldt’s chef created the recipe but another version says it was created by Sophia Lalonde, the wife of a fishing guide. Whichever story you believe, when George Boldt got ahold of the recipe, he put it on the menu at the Waldorf Astoria, and the rest is history.

Today, the archipelago of 1864 islands in the St. Lawrence River remains a vacation paradise for outdoor enthusiasts. Only a few islands are reachable by ferry; otherwise private watercraft are required with plenty of boat rentals available throughout the area. Twenty-one islands comprise the 1000 Island National Park of Canada with docks, trails, and camping facilities.

As we embarked our cruise boat, the day was warm and sunny. We enjoyed the ride with commentary to accompany the close-up views of many small islands and cottages. 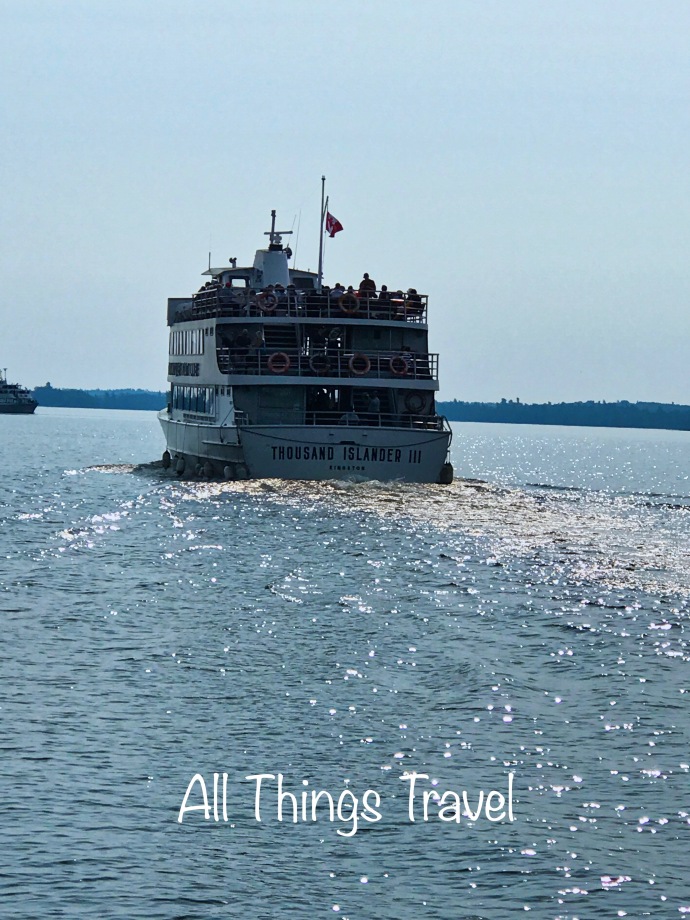 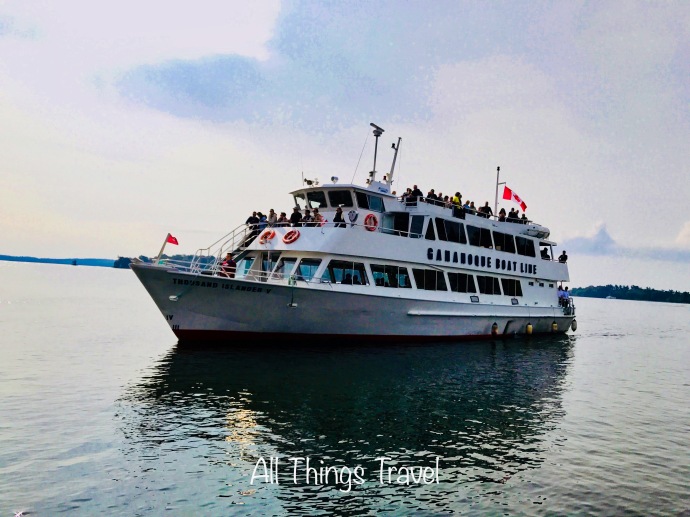 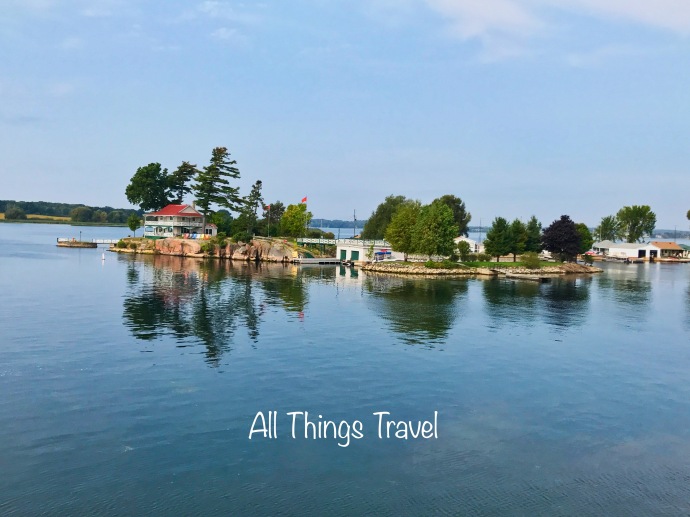 I have no idea which ferry we saw in the photo below but if you look carefully, you can see it’s cable-driven. This method is safer on a river with a strong current. We were lucky to have gotten a look at this one in action. 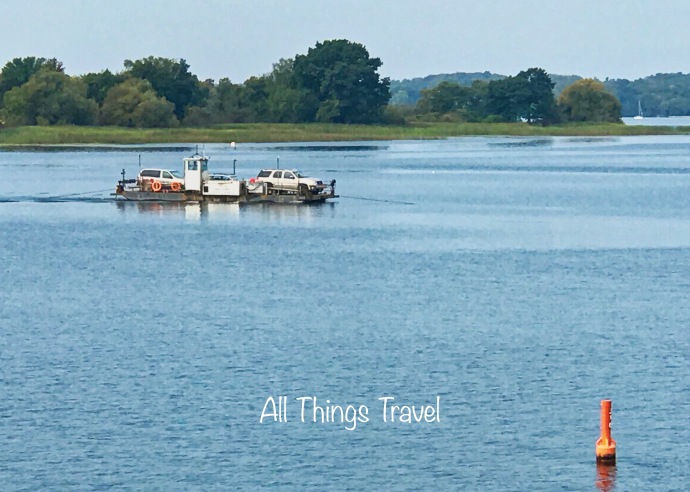 Many of the islands are small enough to accommodate just one cottage. In fact, on our cruise they told us to be considered an island, it must be at least 6 square feet of land with at least 2 trees. I read on various websites, however, that the requirement is one tree and the land must be fully above water 365 days a year. Either way, some of these islands are very small and could easily be submerged by a high wake. 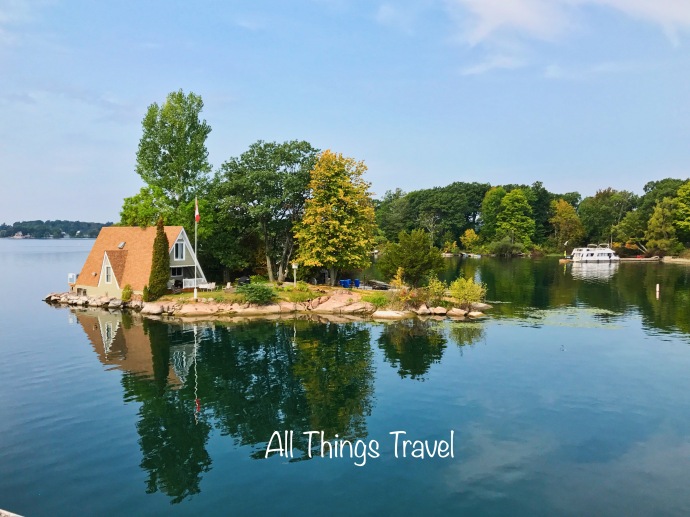 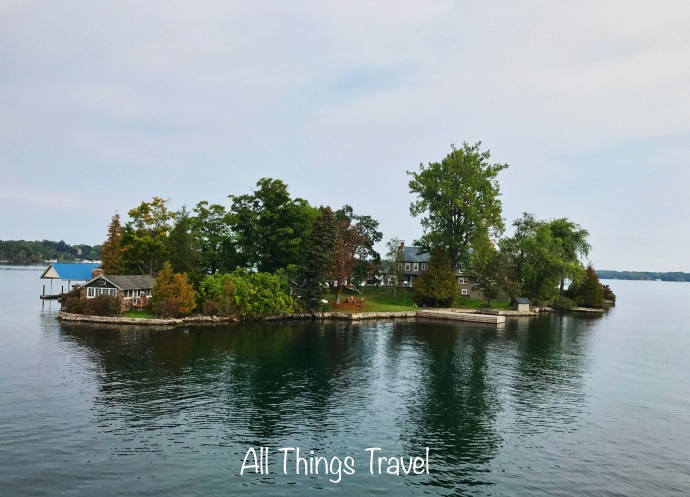 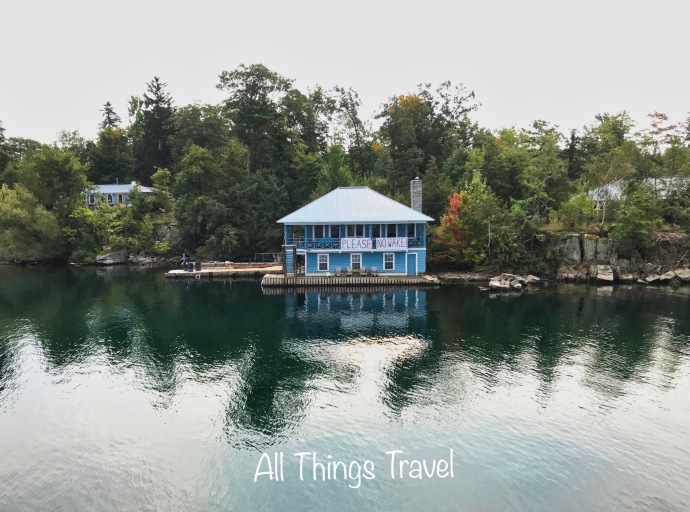 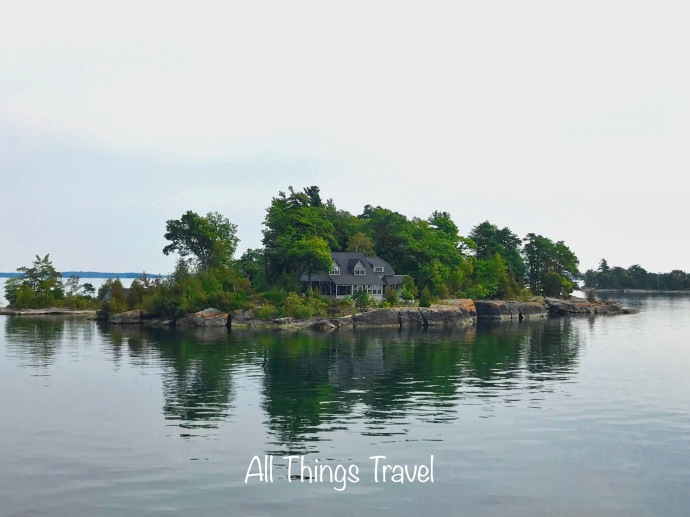 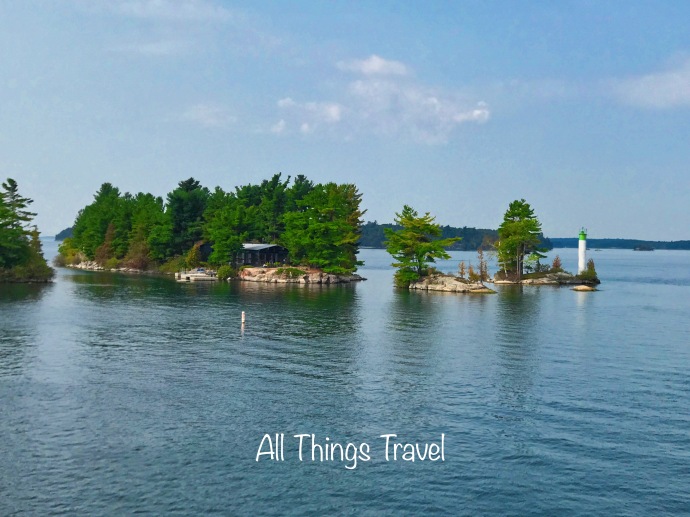 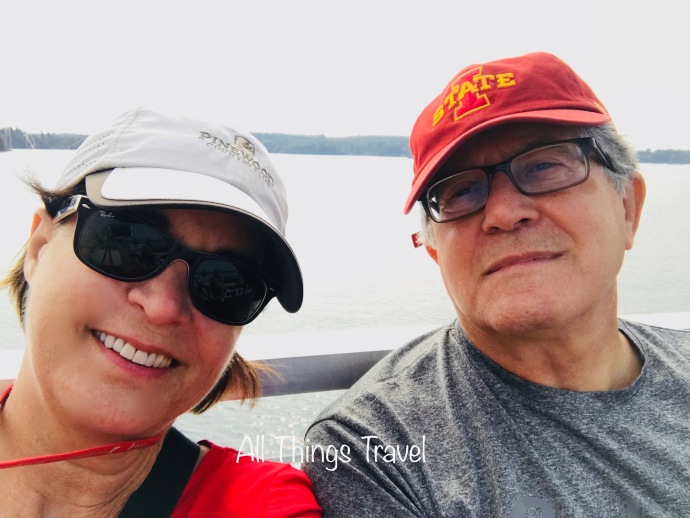 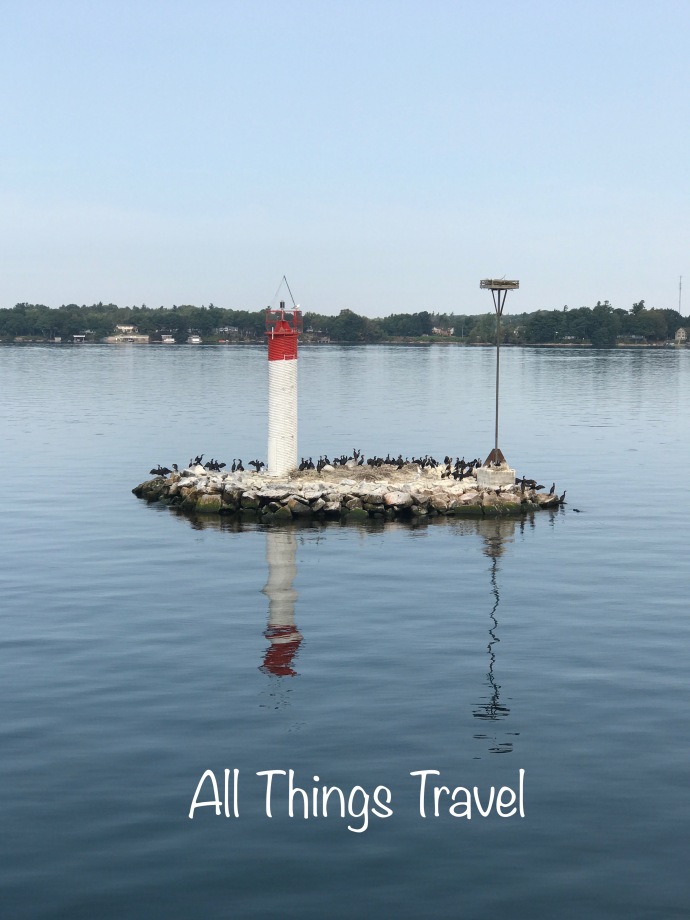 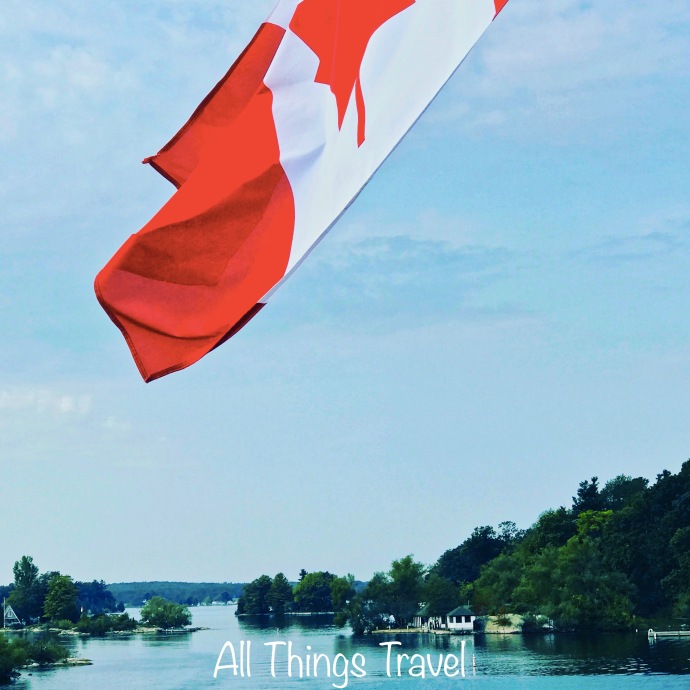 Following our cruise, we crossed the Thousand Islands International Bridge to re-enter the United States. 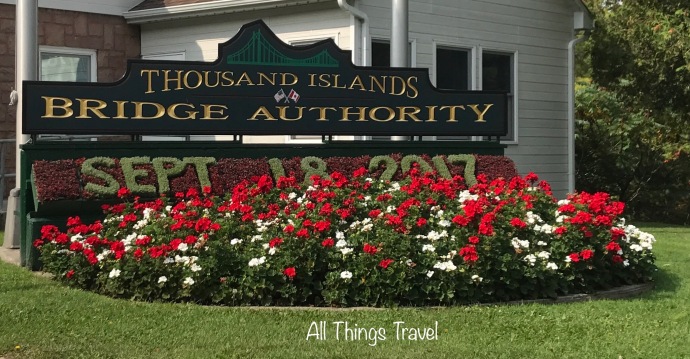 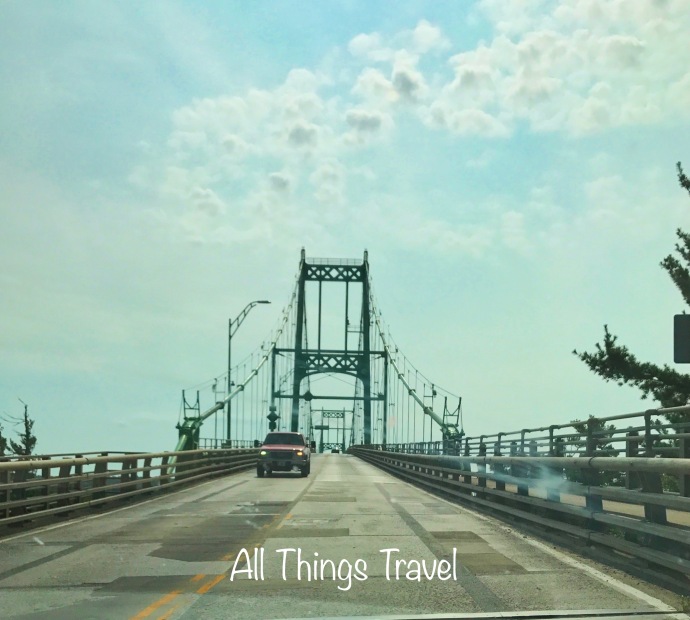 View of the St. Lawrence River from the Thousand Island International Bridge

We had planned to follow the shore of Lake Ontario to Niagara Falls but when I saw Seneca Falls, NY on the map, I was keen to visit the site of the first women’s rights convention in the U.S. and Jim was willing. 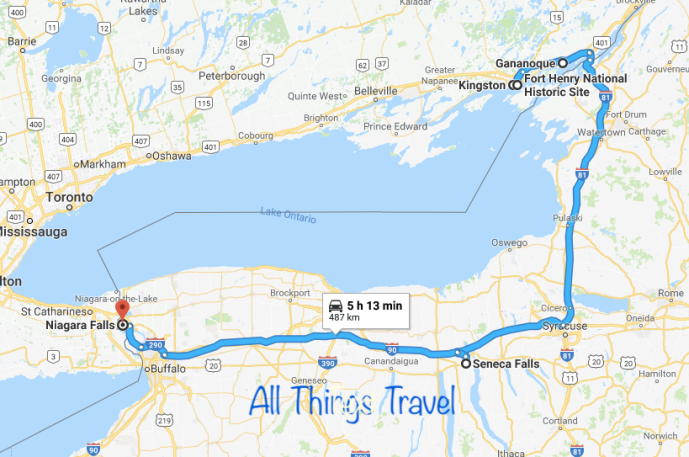 In July 1848, over 300 women and men gathered in the Wesleyan Chapel in Seneca Falls, NY to discuss the rights of women. Led by Elizabeth Cady Stanton and Lucretia Mott, on the first day only women were allowed to attend and discuss principles. On the second day, 100 women and men discussed and signed the Declaration of Sentiments which expanded on the sentiments expressed in the Declaration of Independence and began with, “We hold these truths to be self-evident, that all men and women are created equal.” 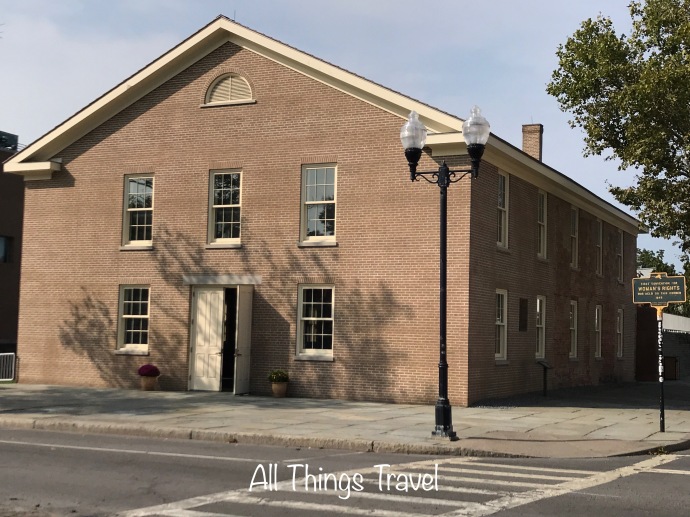 Restored Wesleyan Chapel where the convention was held 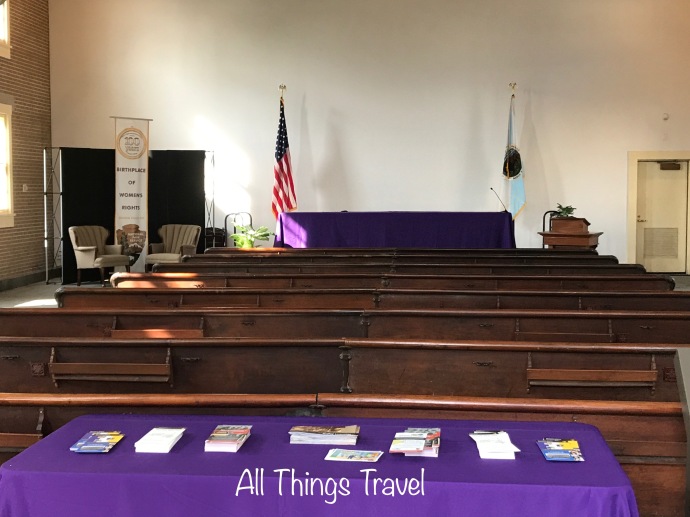 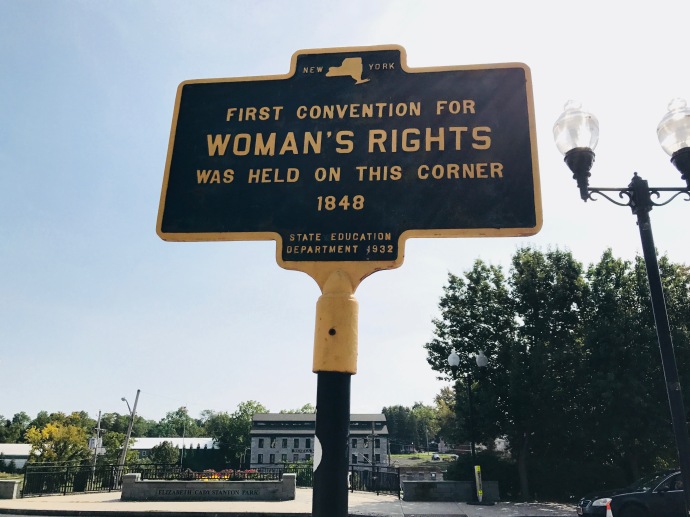 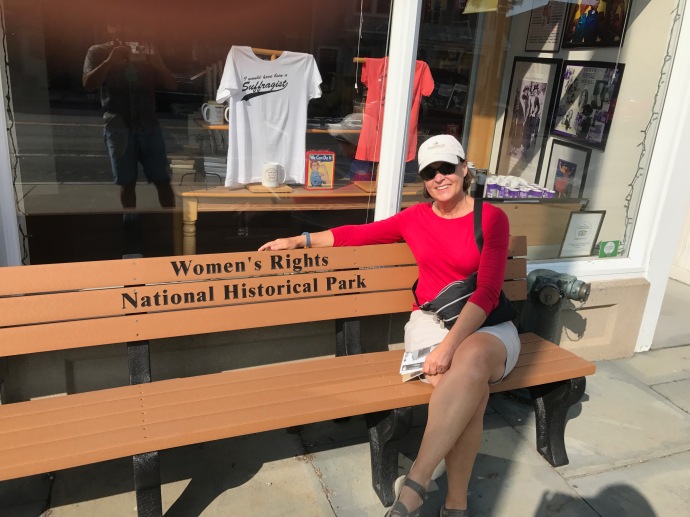 Outside the Visitor Center at Women’s Rights National Historical Park

For me, the most moving exhibits inside the Visitor Center were the First Wave Statue and an exact replica of the suffrage banner. The First Wave Statues represent the first wave of women’s rights activists including the 5 organizers of the convention, the men who supported their efforts, and others who did not sign the Declaration of Sentiments. 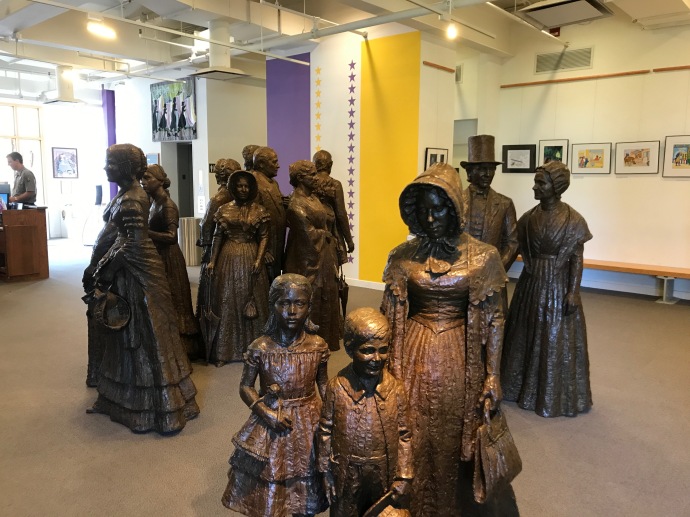 The suffrage banner celebrated the ratification of the 19th Amendment in 1920 granting women the right to vote. The colors in the banner are purple for justice, white for purity of intent, and gold for courage. The stars represent the 36 states that ratified the amendment. 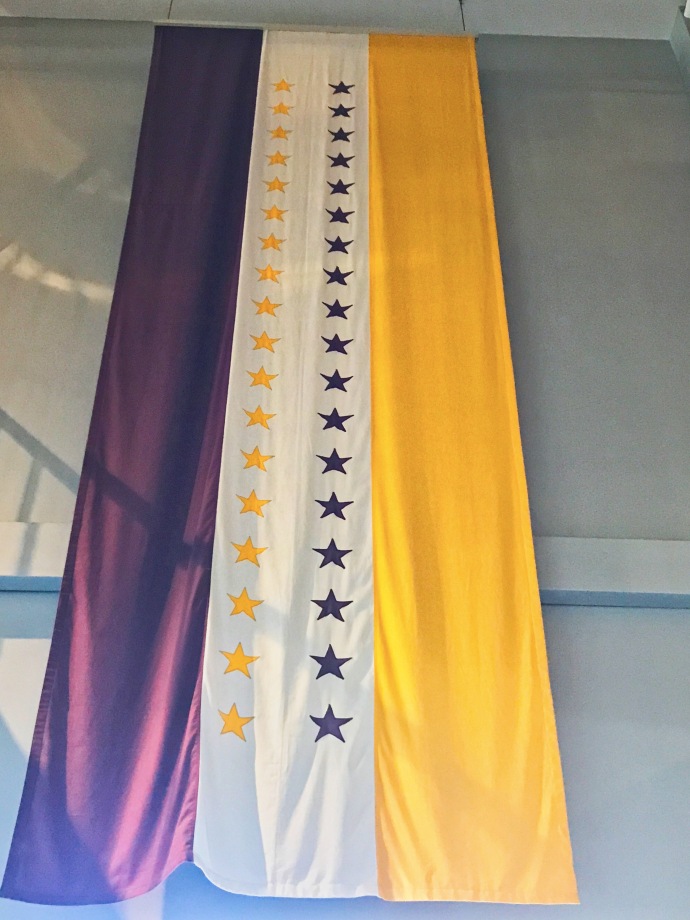 In 1980, the Women’s Rights Historical Park was established as part of the National Park Service. It’s easy to forget the struggles of those who led the way to establish the rights of women. It took another 72 years after the convention to secure the right to vote for women. Today, we have enjoyed that right for fewer than 100 years. This national park serves as an important reminder.

We finished day 7 in Niagara Falls to celebrate our wedding anniversary which I’ll share in my next post.

Based on events from September 2017.